Twelve years after signing a climate forest deal with Brazil, most of the money transferred by Norway to the Amazon Fund remains untouched. This amounts to NOK 6 billion and illustrates how little political backing there has been in Brazil for the scheme. The fund has now been in limbo for more than a year, but Norway opts not to demand reimbursement, instead hoping for a miraculous breakthrough. 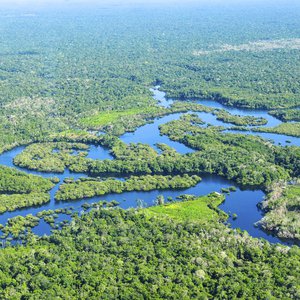 Normally, Norwegian aid must be spent the year that it is disbursed to a recipient. In the case of the Amazon Fund, the principle vehicle for channelling Norwegian climate forest aid to Brazil, this rule has been disregarded and billions of crowns are sitting unused in the fund.

According to figures provided to Development Today by the Amazon Fund, the amount not yet committed to projects was 2.89 billion Brazilian rea by the end of last year. This translates to NOK 5.17 billion at current rates or 61 per cent of the total resources received since 2008. If we add funds earmarked for projects but not yet disbursed, unspent funds exceed NOK 6.4 billion. Since Norway contributes 94 per cent of the resources to the Amazon Fund, Norway’s share of unspent funds is about NOK 6 billion.
Photo: Neil Palmer / CIFOR

“With currency fluctuations and investment income, the available unallocated funds in the Amazon Fund stand at approximately NOK 6 billion as of June 1 this year,” a spokesperson at the Climate Ministry  in Oslo says.

Norway could demand reimbursement of some NOK 5 billion not yet committed to projects. But this would likely mean a collapse in the cooperation. Instead, Norway is opting for the patient approach. “Our preferred outcome is that the funds can once again support an effective Brazilian action plan to reduce deforestation,” the ministry spokesperson says.

While a dispute with the government of President Jair Bolsonaro, which erupted last year, remains unresolved, the accumulation of this gigantic amount of unspent aid money predates Bolsonaro’s rise to power in Brazil.

Climate forest cooperation between Norway and Brazil, which began in 2008, was meant to be a role model for implementing an international system to reward tropical countries to leave their forests intact, based on the idea of reduced emissions from deforestation and land degradation (REDD+). Norway is the largest global provider of climate-driven rainforest aid and Brazil was the crown jewel in the Norwegian REDD+ portfolio.

Starting in the early 2000s, the Brazilian government initiated sweeping policy changes which resulted in a dramatic drop in deforestation. According to the bilateral arrangement, Norway would reward reduced carbon emissions from deforestation in Brazil, compared with a historic average, with payments made to the Amazon Fund. The fund, in turn, would support forest conservation projects. A key feature of this result-based arrangement, distinguishing it from other aid-financed projects, is that money was meant to be a “reward” for results achieved the previous year.

In total, Norway has transferred NOK 8.3 billion into the Amazon Fund, which is housed in the Brazilian development bank, BNDES. Between 2010 and 2016, Norway disbursed about NOK 1 billion a year. But as deforestation in Brazil has increased, Norway’s payment levels have fallen accordingly. For 2019, Brazil earned only NOK 300 million through the agreement, but the amount was never disbursed.

The election of the far-right climate-sceptic Bolsonaro in January of 2019 marked a turn for the cooperation with Norway. Bolsonaro restricted the capacity of the environmental agency Ibama to control illegal logging and encouraged the expansion of agriculture into indigenous lands. A few months into Bolsonaro’s first year as president, the Brazilian government changed the composition of the Amazon Fund’s board, weakening the role of non-governmental organisations and indigenous people.

From Norway’s perspective, Brazil’s move was a “breach of the legal agreement” between the two countries since any change in the fund’s governing structure had to be agreed on by all parties. As a result, Norway does not have “a technical or legal basis on which to make new disbursements to the Fund, nor to allocate unallocated money within the Fund to specific projects,” the ministry spokesperson says.

The aid agency Norad says a breach in the agreement opens the possibility for Norway to demand that unspent funds be reimbursed. “If the funds are unspent and not yet committed, we can demand reimbursement,” Anne Kristin Martinsen, Head of Norad’s Legal Department told to Development Today last year. “Each party may terminate the agreement upon three months written notice” and “unspent uncommitted” funds, including the donor’s share of any income, returned to the donor.

Norway has chosen not to do so.

Ola Elvestuen, Climate Minister at the time, said Brazil’s actions showed that the government was no longer interested in stopping deforestation. Bolsonaro responded, accusing Norway and Germany, which had withheld EUR 35 million in its forest aid, of meddling in Brazil’s affairs. Despite the bombastic public exchange, the ministry in Oslo insisted that “dialogue among the partners to the Amazon Fund continues.”

Elvestuen’s successor Sveinung Rotevatn, who became minister two months ago, has followed the same line. “There is an on-going dialogue with Brazil on this issue,” the ministry spokesperson tells Development Today.

The Norwegian ministry says that projects started before June 2019 continue to be implemented, but unallocated money in the Amazon Fund cannot be used on any new initiatives in the absence of a governance structure and strategy. “We hope that will change,” the spokesperson says.

Norway’s dilemma over what to do with this colossal chunk of money exposes a fundamental imbalance in the bilateral cooperation. While Norway has faithfully disbursed aid money into the Amazon Fund year after year, the political interest on the Brazilian side has been much less enthusiastic as evidenced by the accumulation of unspent funds. It was said during the first years that BNDES was not set up to manage small projects and it took time for the mechanism to start functioning. But 12 years on, disbursement has continued to be sluggish.

Bolsonaro is not yet half-way through his presidential term and shows no sign of softening. How long can Norway allow billions of aid crowns to sit unused?

The urgency of this question is compounded by the coronavirus crisis which is putting unprecedented pressure on global aid budgets. As Brazil emerges as an epicentre of the pandemic, fears are growing of a surge among indigenous communities that have low resilience against COVID19 and live long distances from health care facilities.

The Climate Ministry in Oslo says Norway takes the situation “very seriously.” Over the last year, the ministry has provided support to indigenous peoples organisations, civil society actors, the private sector and state governments, including on COVID response. This amounts to about NOK 62 million. The NOK 6 billion in the Amazon Fund remains, however, untouched.